So here’s a freaky fact:  For nearly two hundred years scientists have known that an atom can act like a particle or a wave depending on whether it is being observed or not!  This means that the one thing science has held sacred, its objectivity, can be tossed out the window.  It turns out the very act of observing affects whether a particle or a wave manifests.  Our experience of the world is completely subjective.  Let me attempt to explain this craziness in a nutshell.

In 1801, a guy named Thomas Young challenged the prevailing belief that light, or photons, are particles by publishing a paper on the results of his experiments on light.  In it, he proved the wave like qualities of photons by showing their ability to create interference patterns.  This experiment later became known as the Double Slit Experiment, one of the most famous and replicated experiments in physics.

Recent versions go like this:  Photons are shot through one panel that has two vertical slits cut into the middle, and onto a solid panel behind it.   If the photons were particles, they would see two solid lines on the back panel.  If the photons were waves, they would see an interference pattern on the back panel.  Imagine water flowing through the two slits.  Waves of water coming through each of the slits would interfere with one another before they hit the back panel causing lighter and darker areas, where either the crests canceled out the troughs, or the crests and troughs were amplified. 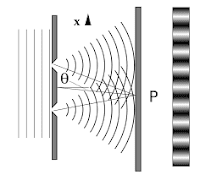 This is an interference pattern, created when waves pass through the two slits.

Here’s the crazy conclusion:  If the scientists were observing the experiment, the photons went through the slits and formed two parallel lines on the solid panel in back, just like particles would do.  If they weren’t observing, the photons acted like waves and went through the two slits like water would, leaving an interference pattern on the back panel. (see figure)  Not only that, they’ve done this experiment with electrons, atoms, even molecules and each time they get the same results.  If no one was looking they got waves, someone looked they saw particles.  That left only one conclusion:  the observer alters matter through the act of observation.  You can begin to see why some really smart people have been scratching their heads about this for decades.

The solid lines in the background are created by particles passing through the two slits.

This is not the result scientists expected.  Up to this point, science had laid its foundations in objectivity and the fact that there is a material world ‘out there’ separate from us. This experiment proves that reality is actually completely subjective.  Our awareness or consciousness directly affects matter, and therefore energy.  The mechanism by which this happens is still a mystery but scientists have banded into two camps.  Those that continue to look for the answers in the material world and those that realize science has left out the most important part of the equation, the mind or the observer.

What does this mean for you?  Well it means you’ve been misinformed along with the rest of the world.  It means that you affect matter and energy.  Our dense, solid world is actually mostly empty space (see my previous blog, Fundamentally, I’m NOT what you see!) filled with dark energy and dark matter that is somehow affected by you, the observer.  The ‘world’ is more fluid and we are more powerful than we thought.

All of a sudden, it seems very much like we are living an episode of Star Trek where alternate realities, time warps, and other dimensions are actually real!  Holy Crapoly!  I can see why religion wanted to keep all this information under wraps!  What if ALL THE PEOPLE woke up and realized their divinity?  The world as we know it would cease to exist, in a very good way, in my humble opinion.  The power belongs to you.  What are you going to do about it??

So here’s the challenge:  Just simply try to wrap your brain around all that!  It’s taken me about 20 years just to be able to give you that nutshell!! LOL